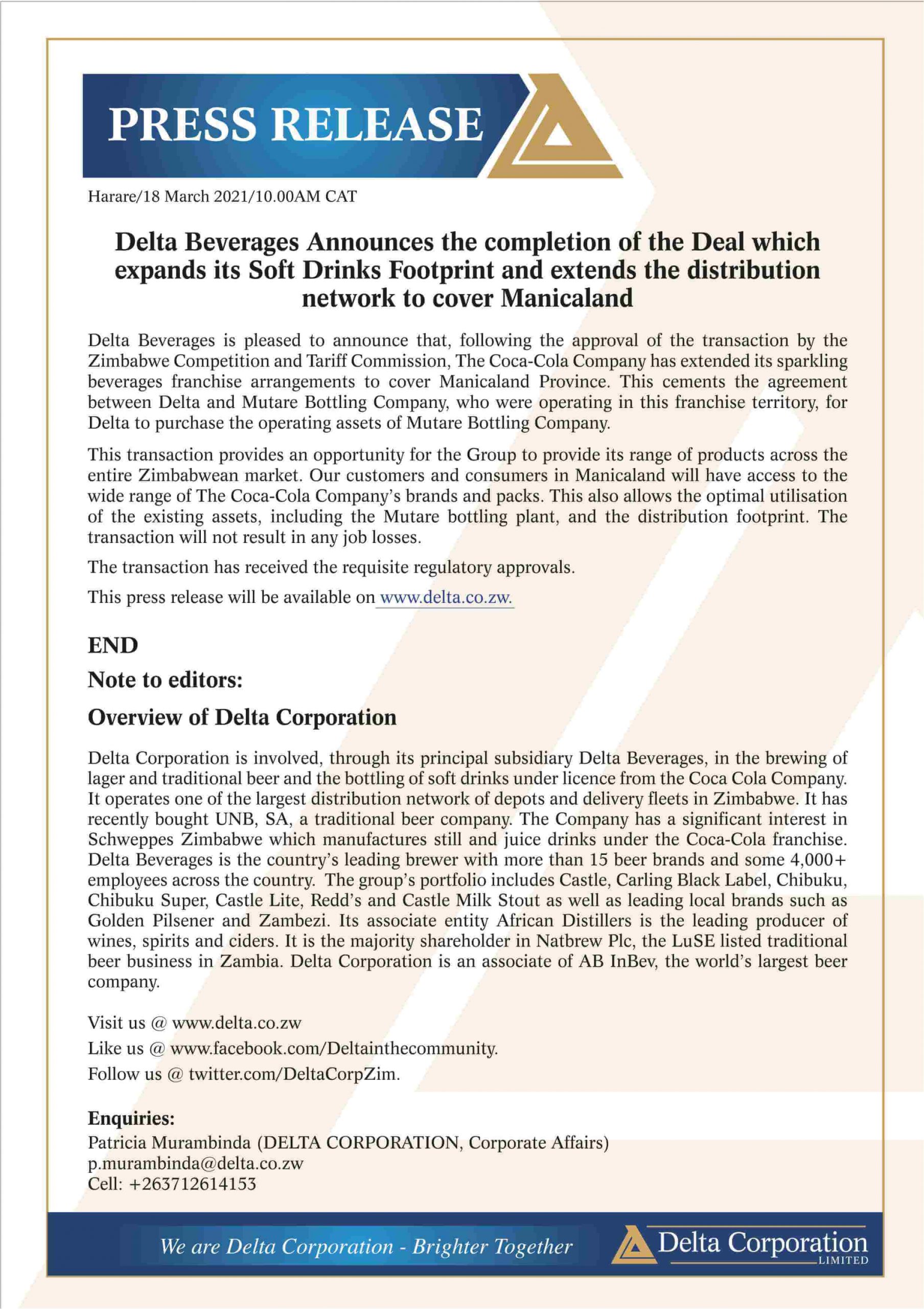 Delta Beverages is pleased to announce that, following the approval of the transaction by the
Zimbabwe Competition and Tariff Commission, The Coca-Cola Company has extended its sparkling
beverages franchise arrangements to cover Manicaland Province. This cements the agreement
between Delta and Mutare Bottling Company, who were operating in this franchise territory, for
Delta to purchase the operating assets of Mutare Bottling Company.
This transaction provides an opportunity for the Group to provide its range of products across the
entire Zimbabwean market. Our customers and consumers in Manicaland will have access to the
wide range of The Coca-Cola Company’s brands and packs. This also allows the optimal utilisation
of the existing assets, including the Mutare bottling plant, and the distribution footprint. The
transaction will not result in any job losses.
The transaction has received the requisite regulatory approvals

Delta Corporation is involved, through its principal subsidiary Delta Beverages, in the brewing of
lager and traditional beer and the bottling of soft drinks under licence from the Coca Cola Company.
It operates one of the largest distribution network of depots and delivery fleets in Zimbabwe. It has
recently bought UNB, SA, a traditional beer company. The Company has a significant interest in
Schweppes Zimbabwe which manufactures still and juice drinks under the Coca-Cola franchise.
Delta Beverages is the country’s leading brewer with more than 15 beer brands and some 4,000+
employees across the country. The group’s portfolio includes Castle, Carling Black Label, Chibuku,
Chibuku Super, Castle Lite, Redd’s and Castle Milk Stout as well as leading local brands such as
Golden Pilsener and Zambezi. Its associate entity African Distillers is the leading producer of
wines, spirits and ciders. It is the majority shareholder in Natbrew Plc, the LuSE listed traditional
beer business in Zambia. Delta Corporation is an associate of AB InBev, the world’s largest beer
company.