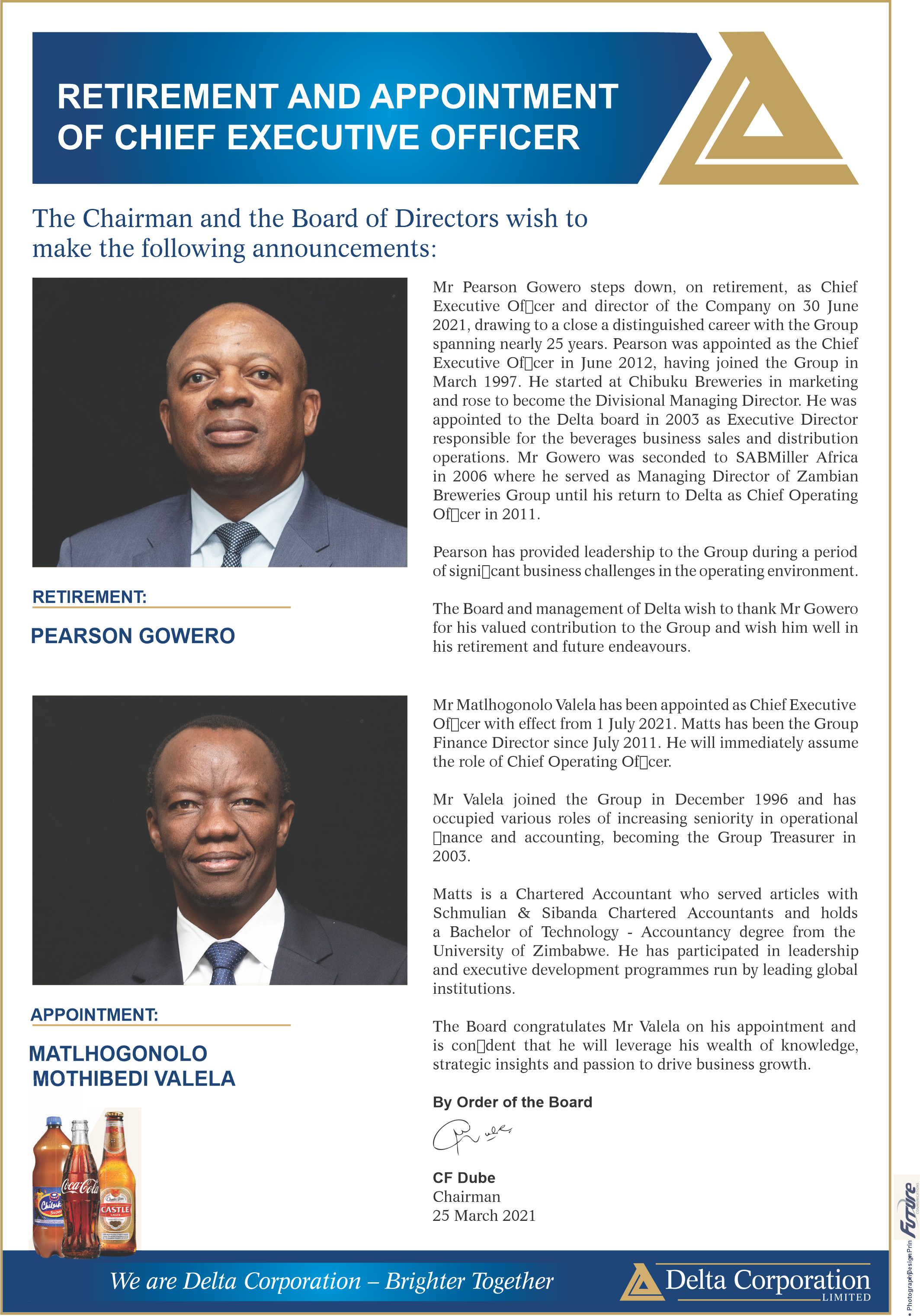 The Chairman and the Board of Directors wish to make the following announcements:

He started at Chibuku Breweries in marketing and rose to become the Divisional Managing Director. He was
appointed to the Delta board in 2003 as Executive Director responsible for the beverages business sales and distribution operations. Mr. Gowero was seconded to SABMiller Africa in 2006 where he served as Managing Director of Zambian Breweries Group until his return to Delta as Chief OperatingOfficer in 2011.

Pearson has provided leadership to the Group during a period of significant business challenges in the operating environment.
The Board and management of Delta wish to thank Mr. Gowero for his valued contribution to the Group and wish him well in his retirement and future endeavours.

Mr. Matlhogonolo Valela has been appointed as Chief Executive Officer with effect from 1 July 2021. Matts has been the GroupFinance Director since July 2011. He will immediately assume the role of Chief Operating Officer.

Mr Valela joined the Group in December 1996 and has occupied various roles of increasing seniority in operational
finance and accounting, becoming the Group Treasurer in 2003. Matts is a Chartered Accountant who served articles with Schmulian & Sibanda Chartered Accountants and holds a Bachelor of Technology – Accountancy degree from the University of Zimbabwe.

He has participated in leadership and executive development programmes run by leading global
institutions. The Board congratulates Mr Valela on his appointment and is confident that he will leverage his wealth of knowledge,  strategic insights and passion to drive business growth.

By Order of the Board

Mr Alex Makamure has been appointed as the Group Finance Director with effect from 1 April 2021. Alex
is currently the Company Secretary and Group Treasurer with functional responsibility for Corporate
Affairs and Supply Chain. Mr Makamure joined the Group in 1998 as Finance Manager at Chibuku
Breweries Division becoming Divisional Finance Director in 2002. He served as the General Manager
Finance for the combined beverages business from 2003 until his appointment as Company Secretary in
January 2006.

The Board congratulates Mr Makamure on his appointment and wishes him success in this position.

By Order of the Board